It’s amazing how just when you get in a nice little groove with your favorite toddler, they decide to go and screw everything up.  In Simon’s case, this means dropping his nap.

That’s right, I now have a 20-month-old who, most days, is awake continuously from 8:00am to 8:00pm.  A 20-month-old who will not be dissuaded from this schedule, who would rather scream for an hour as I cuddle him, rub his tummy and sing every song known to man than deign to close his eyes at midday and potentially miss something Exciting.  And, not coincidentally, he is now a 20-month-old who nods off in the backseat when we go to pick Jeff up from work, and who has decided to fuss and hit and bite his way through the past several evenings.  I WONDER WHY.

Which means that today I’ve bought 10 minutes of silence this way: 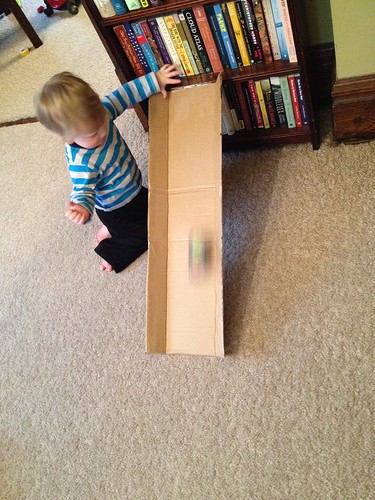 I ordered a breadbox from Amazon the other day and it arrived this afternoon in a huuuuuuuuuuuge box.  The better to repurpose, eh?  Whoosh whoosh whoosh!

…aaaaaaand he’s moved on.  Now we’re back to staring at me and tugging at my sleeve in hopes I’ll let him go wreak havoc on the pantry. 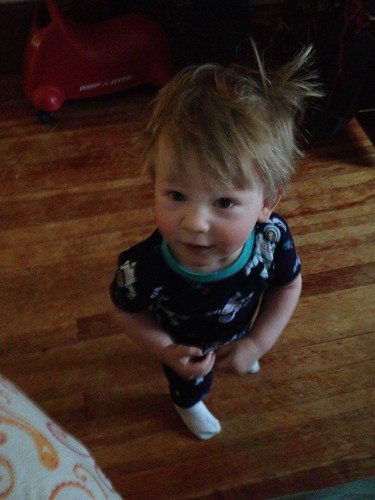 We’ve been up to a LOT of good adventures these past few weeks.  Rather than yammer about them in some huge blog post, you may as well just check out my Flickr photostream.  It’s not like a tremendous amount of narration is required anyway 😉

Jeff and I had been hoping to catch a matinee on Saturday but our sitter cancelled on us at the last minute so a change in plans was required.  We ended up making the trek up to Cleveland and visiting the science center.  It was well worth the trip 🙂 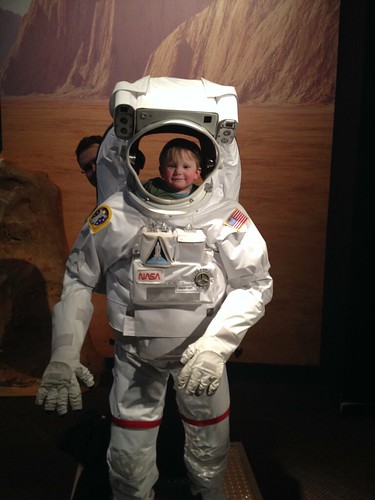 Simon learned all about the building blocks of DNA: 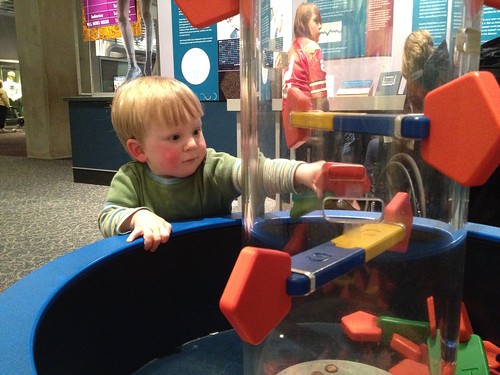 And I impressed Jeff by remembering each base pair.  9th grade science FTW?  Though to be fair, I’m not sure DNA had been discovered yet when he was in high school 😉

The science center’s little kid play area had a ball pit with all sorts of buckets and pulleys (and a few kids who were definitely not under 6), so we plopped Simon in the middle of it and stood back to see what he thought: 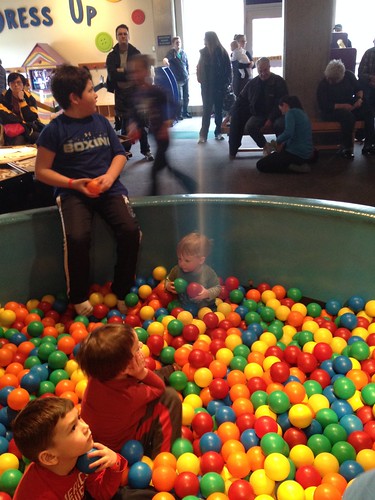 Clearly he wasn’t quite sure what to make of it.  He just grabbed a few balls and froze, while dozens of others whizzed around him in the melee of tiny humanity. 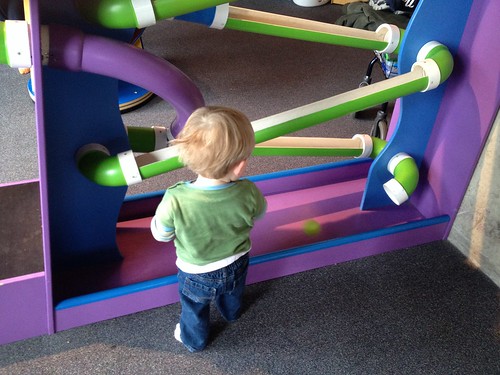 Jeff and I are pretty sure he’d still be there sending that tennis ball whizzing around, if we hadn’t dragged him away after, oh, 6 or 7 hours.

But he was OK, because after that we found a slide! 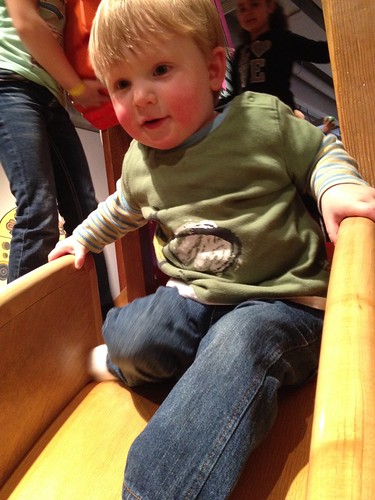 He climbed the stairs all by himself (with Daddy spotting) and slid down all on his own, over and over.

He was a little trepidatious at first but made a friend who helped him along. 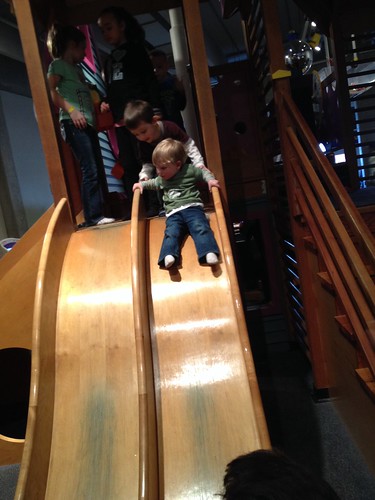 We escaped the kid’s area eventually, though, and found the physics exhibit that was a little bit more interesting for all of us.  I LOVE how much hands-on stuff this science center had, and how even on a snowy Saturday afternoon it wasn’t too crowded.

Planetary atmosphere simulations are still a liiiiiiiiittle bit above his level, though. 😉 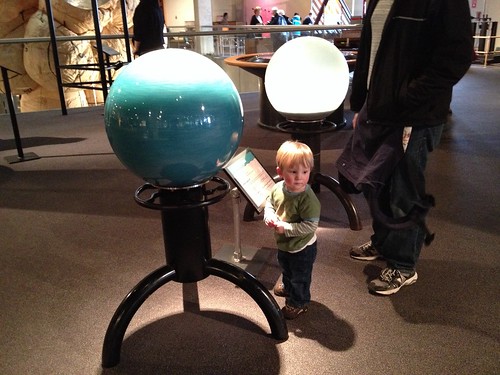 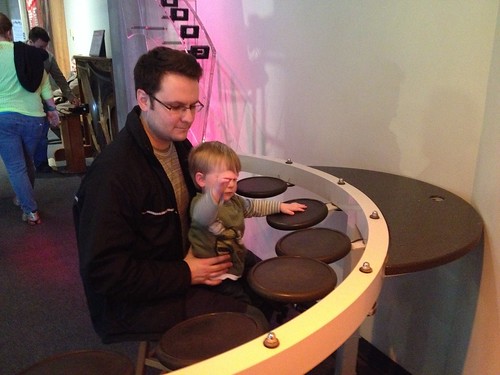 And this giant wall of gears was pretty much the best thing ever. 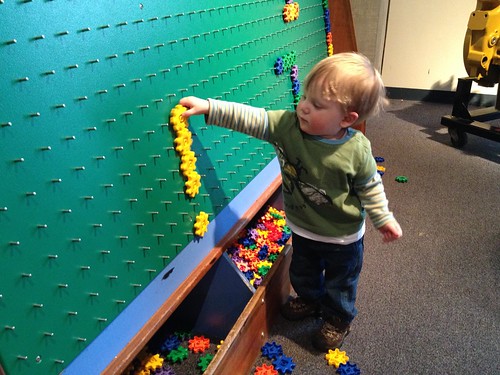 Of course, on the way back to Akron we got caught in an end-of-March “fuck you” from the weather (actually it was a quite pretty – 3-4″ of snow that pretty much melted on Sunday) that made for a little bit of nervous driving, as the highway department hadn’t prepped the roads at all.

This week has been pretty busy, but also low-key.  Errands (I went to Home Depot yesterday morning and got the supplies for a couple kid projects, and some grass seed and stuff to try and make this place have a modicum of curb appeal for when the homeowners list it for sale this summer), laundry, the usual.  It was supposed to rain all day on Tuesday but turned out to be almost 70* and sunny, so I was able to hang out two loads of laundry on the line (first time since, what, November?) and Simes and I went on a long walk that culminated in approximately 45 hours of swinging at the park.  I made him push his own stroller, because I am cruel like that. 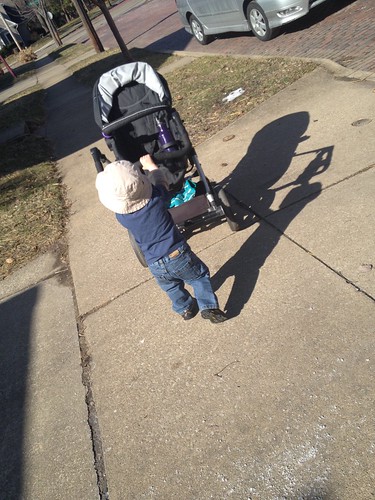 It’s pouring rain all day today so we probably won’t get to go out (maybe to stomp some puddles in our dragon boots if it lets up a bit), but I got this picture yesterday, which proves that spring really IS coming to northern Ohio 🙂 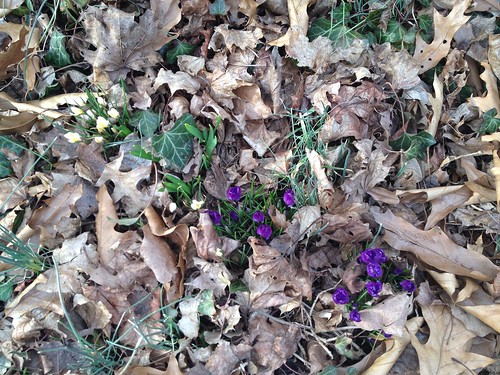 Hopefully this weekend the weather will cooperate and I can rake up the last of the leaves, maybe get that grass seed down, and get things ready for spring.  Until then, I’m going to go make some energy bars with my sous chef and maybe dig into that blueberry bread I baked yesterday for Jeff’s breakfasts.  And wait for Simes to drop face-first into a dead sleep in the middle of the playroom at 6:00 because THAT’S WHAT HAPPENS WHEN YOU’RE 20 MONTHS OLD AND DON’T NAP.  Ahem.